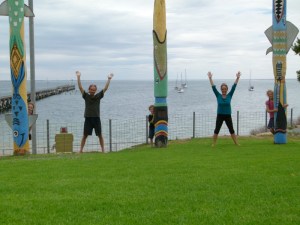 Just like big Kenny sings it in ‘The Gambler’ you’ve got to know when to hold em, fold em, walk away and run – We too know when the time is right.  We have had the most amazing time traveling around this big, beautiful country as a family of five over this past year; it’s been a real life changing, memory making experience we will never forget. 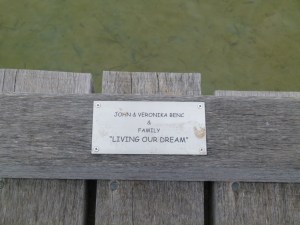 Streaky Bay Jetty, Lots of Plaques – This One Struck A Special Chord with Us!

The ‘General lil Red Rover’ (97 Land Rover Discovery – $2900 Ebay Bargain) has served us so well and we are it’s biggest fans.  It wasn’t too far into South Australia, (the day after we crossed the mighty Nullarbor in fact!) and we decided it was time… maybe not to run but certainly briskly walk. We could see the ‘General’ was out of Aces and it was time to make our way back to our base; our home in South East Queensland. 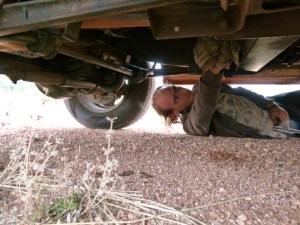 No Guns But Determination and Passion.

Now every gambler knows that the secret to surviv’in is know’in what to throw away and know’in what to keep because it really is true; every hand is a winner and every hand’s a loser.  So let’s talk Bush Mechanics; there we were, having already made the decision to not see South Australia as great as we had originally planned.  The next minute Boom! Bang! Thwack! Crack! – yes that was the sound under my feet it was not pretty, teamed with an abrupt loss of all drive; the car was losing momentum and fast.  Head to the side of the road and think safety, that’s what we did.  Clearing the white line and propping ourselves on the edge of the road was our best bet at this point.  Nailed it!!! 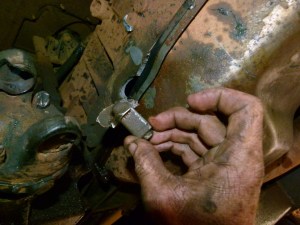 A Sizable Hole in our Gearbox, Oh Dear!!

So there we are outback South Australia, the car was not moving and a definite thud noise was about to be investigated.  I had an inkling it was the tailshaft and indeed the front tailshaft had gave and was flapping around like a hard piece of metal hell bent on doing damage.   Safety first; we were beyond the white line with hazards on.  As  I crawled under the car the tailshaft was hanging in an obvious fashion!  Hmmmm that’s not good!  The end that ‘plugs’ into the gearbox had totally broken – this explained the non-existence of drive. 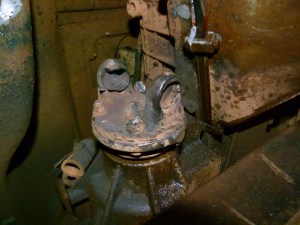 The Front Tailshaft was Cactus.

As if that wasn’t enough the tailshaft in it’s flapping motion had punched our gearbox very hard!  So hard in fact it busted a hole the size of a 50c piece into our actual gearbox and was now bleeding profusely with automatic transmission fluid. Hmmmm, that’s not good! Now if it had been the gearbox sump this would have been better but NO! it was the actual gearbox.  Oh Dear! now we are in outback South Australia with a car that was seriously in trouble and can not move.

I’m not going to say I didn’t go to pieces and weigh up all our options, because I did.  Drawing on the blind faith and strength that my divine wife gives me on a daily basis I began to think.  This was a 4wd and we had not engaged the 4 wheels on ALL of our lap at this point, but there were at least two wheels that could still drive.  There was still some major things to work through though: 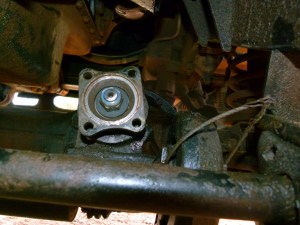 So I busted out the two 5 inch long 14mm spanners that I had that fit and to be honest I wasn’t hopeful.  I am a weed, my guns … well what guns – but I did have passion and I was determined!  No leverage though and I couldn’t even put a pipe over my tool to give me more leverage; because it was a confined space, no hydraulic lift or even stands.   I huffed and I puffed and with all of my might and I managed to undo all 4 bolts and now the front tail shaft was unattached; that solved the flapp’in Dolphin  problem. 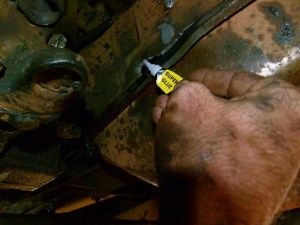 Ok on to the bigger problem, yes our gearbox was bleeding hard and had a big hole.  Evaluating what I had at my disposal it fell short of the mark, a $2 pack of 3 super glues and some Sikaflex – hmmm again not good.  Alloy can’t be soldered with my $9 25w soldering iron so that’s out.  Super Glue however was developed by NASA; we found that out on our tour of the dinosaur trail in outback Queensland.  So super glue was the first card I played, carefully attaching the major chunk of alloy into the gearbox with $2 superglue.  It would hold but it’s prone to cracking with excessive vibration, not to mention the heat.  My old friend Sikaflex mentioned here would come into play at this point, but still high temperature, high vibration is one thing – dude! This is on the side of a gearbox it was going to have to be better than good. 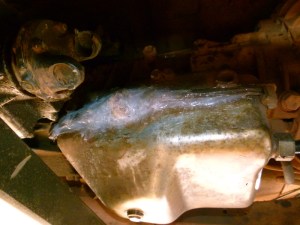 It took 3 layers of Sikaflex and observation to establish the whole hole had been conquered.  This was a major *fistpump* moment for us, we had stopped our transmission bleeding and we had hope.  We put her in 4wd and let the 2 rear wheels drive us, we were once again moving… but it’s a long way from home.  Well we will play our cards close to our chest – was it enough to get us home?  As I handed her my bottle, bottle of transmission fluid that is, she drank down my last swallow.  We are not about to count our money while we are sitting at the table, there’ll be time enough to count em when the deal’ins done.

4 thoughts on “The Gamblin General”