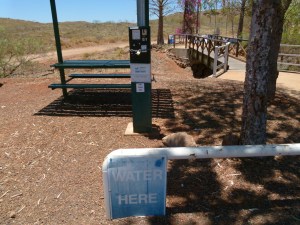 Water, She Gave me Water!

As we rounded the top of beautiful Western Australia and prepared to head South we were about to enter some A1 camp spots.  Scooting through Roebourne we admired the old Gaol before heading into Karratha.  Karratha has everything you need in the way of mainstream supermarkets and variety stores as well as a quality information centre complete with water refill point.  If you are free camping as we do, than you will appreciate the water refill point there a couple of dollars will buy you 100 litres of water – HELLO! 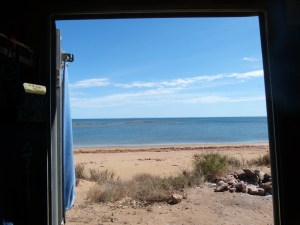 With all the hype of W.A being anti free camping we were thinking ‘oh noes!’ We are here to ‘tell em their dreaming’ – I don’t won’t to go all ‘The Castle’ on you all but this self sufficient van ‘just paid for itself’. W.A is awesome for free camping – well at least in our first hand experience.  Let’s take a look at a couple of free camps near the boom town of Karratha in Cleaverville Beach and 40 Mile Beach.  Firstly we call them free camps because we camped there in the off season and guess what, they were free at that time.  The off season runs from the 1st of October to the 30th of April and it’s free – capped at a 3 day stay.  When we say off season we mean off season as we were virtually alone in our time there, just the way we like it 😉 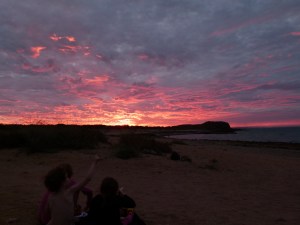 Sunsets to die for in W.A. at Cleaverville Beach.

Generally we are not even beach sort of people, we love mountains and rainforest but when you are the only ones within cooee our appreciation for the beach just went up. Just 26km short of Karratha lay Cleaverville beach. Cleaverville beach was one of our favourite swimming beaches, the waves are not harsh, there is no weed and the beach floor is sandy and descends on a perfect decline.  Cleaverville was simply magic the sunsets there were to die for on a daily basis, exploration was golden too.  The walks around the head there at Cleaverville was pure delight with an ancient feel. 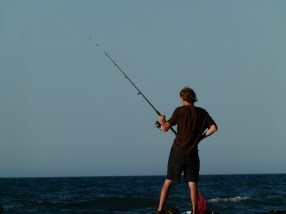 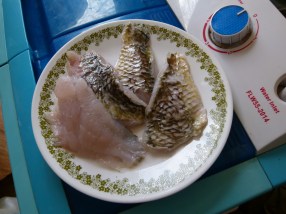 If I can catch em, you can too.

I am no fisherman; in fact truth is I am somewhat of a pussy, catching them is one thing but I would have to dong them – that can be confronting.  Nevertheless I was determined to catch a fish and man up and provide the family with a feed of fish, Winning! this happened at Cleaverville.  It was here that we also met a fellow travelling family and blogger in the Young and Free Ozzie Travellers.  What a treat it was too, Jo and Mark and the boys Bryce and Lachlan are now our good friends.  Learning of their story and watching that family traverse this great country is an honour and privilege they to us are inspiring.  Mark in particular, when it comes to fishing is nothing short of pro and the life skills he has passed onto the boys is straight up impressive.  Mark didn’t look at my tackle bucket which consisted of a hammer some hooks and a sinker and laugh, no instead he imparted positive encouragement and showed me the ways of a serious angler.  I watched Mark and the boys reel in many a variety of fish even including a decent sized mangrove jack.  I myself was stoked to catch and fillet the badboys you see pictured. 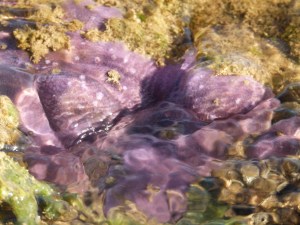 The Coral was Stunning!

At low tide the reef at Cleaverville is exposed which offers those nature lovers like us a tantalizing opportunity to discover precious life in the pools and coral and rocks that belong here.  You may even be lucky enough to witness the migrating turtles at Cleaverville.  Sand flies effect people differently and with no consistent winds they may effect you, in any case though they are a small price to pay and with a concerted effort around dawn and dusk you will counter them effectively. 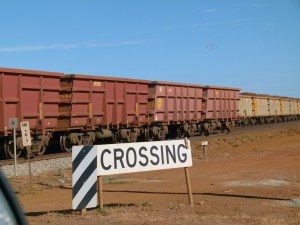 Upon leaving Karratha we witnessed the largest train we had ever seen.  There we were parked at the crossing and thought lets count these carriages, seemed harmless at the time.  234 doggies later and we realised the efficiency and co-ordination of the mining industry was second to none; when the lines lit up with trains going both ways.  Rejoice in the pause, as we did – many things in life may bring frustration but for us this day we loved it! 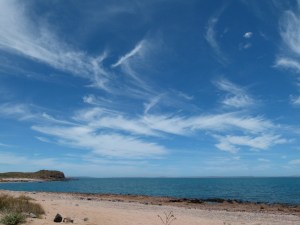 40 Mile beach brought much the same as Cleaverville, a lovely isolated beach experience that we would remember for all time.  It’s about 40 clicks past Karratha and well worth the 10kms dirt road.  You can even refill water down near the mining site at the end for a gold coin donation; a gold coin donation well spent as it goes toward the Royal Flying Doctors Service.

Even spent the lads – Cameron’s 7th birthday here, one I daresay he won’t soon forget.