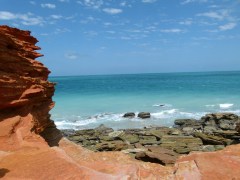 The Beaches in Broome Lived up to the Hype.

Sweeping away your worries in Broome, Western Australia – is a great plan!  Coming from the East coast of Australia we’ve long wanted to see the beaches of Western Australia that we have heard about and seen on T.V.  Sometimes when there is a lot hype or expectation, you can be left underwhelmed – this was certainly NOT the case the first time we saw the Indian Ocean in Broome.  The beautiful turquoise ocean, red rocks and soft sand make for an aesthetically pleasing experience we won’t ever forget!

We Loved the Beach here.

The beach really is spectacular, the white sand of cable beach is a treat.  Spending most days at some stage soaking in the beautiful surrounds in a croc free environment, something we had not experienced for awhile.  We have been eager to visit Cable beach ever since we realised it was the location of where Australia was connected to Java (Indonesia) and subsequently the rest of the world back in 1889.  We first learned of this from our trip to the red centre, which involved many an hour driving along the Overlanders Way.  The Overland Telegraph line connected South and North colonies through the epic pioneering treks of John McDouall Stuart, which you can read a little more about here. 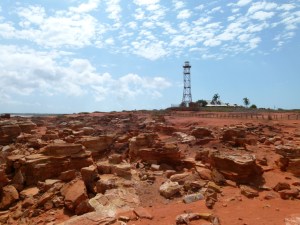 On this trip, our family has a new found appreciation for the ancient dinosaur history that Australia possesses.  We visited the only evidence of a dinosaur stampede in the world just outside of Winton (and by just outside of Winton, we mean 110km down a corrugated dirt road!!  Straya mate!) while on the dinosaur trail of Winton, Hughenden and Richmond.  Combing the beaches at low tide near Gantheaume Point in search of 130 million year old Dino prints was a lot of fun!! We found ourselves constantly surrounded by a chorus of “Whoa! and “Look at this”, as the kids discovered not only ancient dinosaur prints but also crabs, crazy looking beetles, awesome shells and even a spitting octopus!!   The old lighthouse at Gantheaume point also adds character to the place,  but it was the ocean views that ultimately stole the show. The red ochre cliffs in combination with the bluest ocean was spectacular.  As you can see from the gallery below we got a little snap happy and why not too with such beauty.  We visited the beach many times here both at low tide and high tide and was for us, a major highlight and a definite must see.  It’s also the location of Anastacia’s pool a natural spa which an early lighthouse keeper modified for his wife who suffered from arthritis. 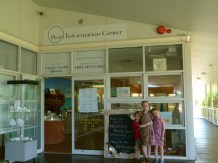 You can’t mention Broome without touching on Pearls, after all it is the Pearl Capital of Australia.  We took a quick tour of the Pearl information centre located right next to the Broome Visitor and Information Centre.  Apart from it selling some magnificent reasonably priced pearl jewellery and artwork the shop itself features a relaxing water feature and friendly staff.  The rear section of the building does a good job in explaining a great deal about pearls, their history, how they are formed, varieties and values and their role in fashion over the centuries. 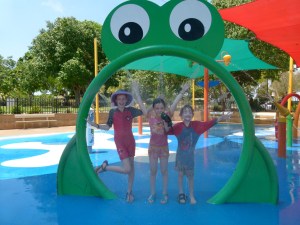 The Kids Loved the Free Waterpark.

Roebuck Bay was another place the Roaming Rowes visited more then once whilst in Broome.  The Beach there was yet again, yep you guessed it – amazing!  For the Roaming Rowe kids, it was where it was at!  Awesome beach side  playground and the site of a waterpark.  Not just any old waterpark either, but a FREE waterpark – Free anything to the Roaming Rowes is always a winner!  Roebuck bay is also one place you can see the natural phenomenon where the moon shines over mud flats creating the illusion of a staircase to the moon.  Stunning to say the least.  Broome was monumental stage in our journey, as it meant that we had made it from East to West and had done it in a boss like fashion, we loved it!