Sometimes you can go from a massive high where the whole family is sharing high fives, straight into a tail spin; the kind of tail spin where you come crashing down to earth pulling back on the stick screaming “Mayday Mayday”.  That is where we were yesterday, having just ticked a major box we had been looking forward to for months.  Seeing the Stromatolites in W.A. was a highlight for us, but the time for us to hit the road jack had come, seems harmless enough. 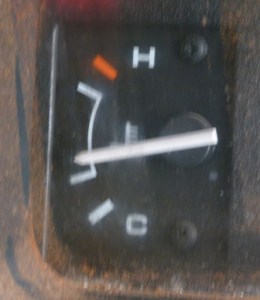 Make sure it works and monitor it closely.

Some 80 kms up the road and it was a real Ground Control to Major Tom moment and yep sure enough Houston had a problem.  Well in this case it was our much loved ‘General lil Red Rover’ our 97 Disco Land Rover.  It’s at this point I need to address not bush mechanics but mechanics 101, the importance of gauges.  Before saddling up on any trip let alone oh I dunno a lap of Oz be certain your gauges are accurate, especially the Temp gauge.  Old school Land Rovers are notorious for having inaccurate temperature sensing gauges but as if by chance the one we got off Ebay for a bargain $2900 had some after market gear integrated which ensured an accurate temp gauge.  An accurate temp gauge and monitoring of it will ensure you don’t cook the donk, let’s face it – a cooked donk, and no amount of bush mechanics will save ya. 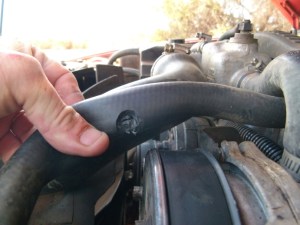 So there we were cruising along on cloud 9  it was a hot day; very hot in fact pushing 40 and the ole girl was working hard pulling ‘Big Van’ up an endless chain of hills.  All good, temp gauge sitting around the half way mark as always when suddenly I noticed it climbing abnormally; it shot above the 3/4 mark very quickly.  “Whoa we have got a problem”, that was me noticing the gauge along with the car up my kiesta, whilst assessing a safe place to pull over with a large emphasis on urgency.  So there we sit safe on the side of the road, I leave the engine running at this point while I assess the issue,  it’s good practice sometimes to ensure you bring the engine temperature down in a   non-dramatic fashion (things don’t like going from hot to cold quickly – it warps or cracks stuff).  I got as far as the front tyre to see fluid and smelt the smell of boiling coolant/water, like it or not the car had to be turned off NOW! 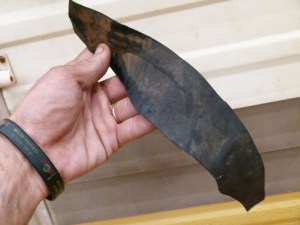 Some rubber tyre tube was sure to play a role.

Bonnet gets popped and I hear the sound of high pressure steam along with a vibrating radiator reservoir, within moments I ascertain a hose has got a hole, wasn’t hard; a stream of boiling hot water squirting out of it was a bit of a dead giveaway.  Boiling water will always win so we have to just wait for it cool down, in doing so we establish no major damage has been done to the engine, this partly due to keeping a close eye on that gauge and acting accordingly and partly due to the fact that the ‘General lil Red Rover’ is just plain boss with it’s old school hard metal. 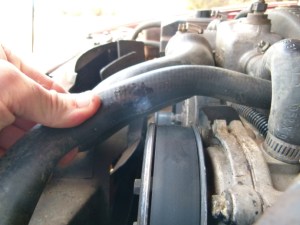 Firstly I plugged it with marine grade high temp silicone.

Family of five, middle of know where, in a far from home, 40+ degree heat, no spare hoses how bad can it be?  Well actually not too bad at all, one thing we always ensure is that we have plenty of water, that’s a must or we would have to consider going all Bear Grylls and let’s face it – ain’t nobody got time for drinking their own urine.  Water or not we still needed to overcome our little problem and so the bush mechanics start.  Walking down on the side of the dirt patch having a shall we say ‘Holy Cow’ moment (I may have censored that)  with the wifey while we work out our next plan I notice an old rubber tyre tube, or a part of one.  I grab it knowing immediately this in some kinda Macgyver way was going to play a role.  I have in my less than satisfactory tool collection a tube of Sikaflex which is a must in my book, this stuff has played it’s role a few times, in essence it’s just a fancy silicone that is marine grade and can withstand high temperatures – beauty!  Zip Ties, along with duct tape and a hammer I rate very highly.  I also have some rubber cement like the stuff you would use to repair a tyre puncture in an emergency.  So not ideal, actually far from it; but was it going to be enough to divert an almost certain disaster? 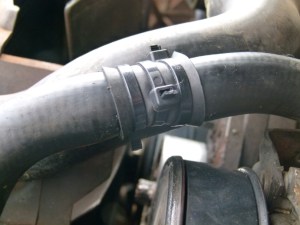 It sure looked pretty at this point.

So I cleaned the area to ensure no oil, water or gum (or half a can of wd-40 that I may have sprayed near the area on this trip).  I carefully smeared a thin coating of Sikaflex not pressing hard or into the hole, more just to act as a plug, then I gave it about halfa to firm up.  Grabbing the rubber tyre tube we found I cut a nice neat strip and cleaned it too.  Then I proceeded to rubber cement over the ‘plugged’ hose and a coating of the same adhesive on the strip of tyre tube.  Wrapping the tyre tube over the hole completely all I needed now was equal pressure while it set and that’s when the zip ties came into play. 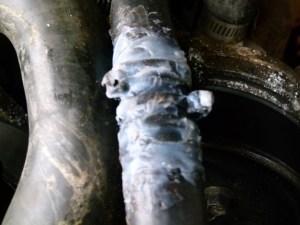 3 Zip ties later and it sure looked pretty, I gave that about an hour drying time and being the big fan of Sikaflex that I am I went back and added a liberal coating over the lot.  So when that was done I wasn’t happy with the zip tie positioning,  I should have thought of that but nevertheless I wanted to ensure the zip tie when cut didn’t hurt another hose nearby.  I cut off another piece of the tube in a less then tidy fashion and wrapped it around the zip ties and then fastened it to the other hose nearby ensuring this problem was not repeated. 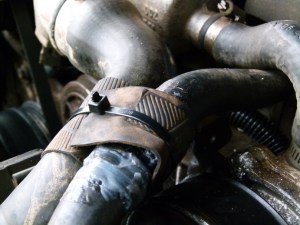 For good measure and preventing a re-occurrence.

So the moment of truth had come, did it work?  After refilling the radiator and checking for air locks (they make your radiator appear full when it’s not) I topped up the radiator a few times.  No water was leaking, not when under pressure, not when at running temperature and not after having driven a further 100kms and 3 zip ties later the problem was solved.