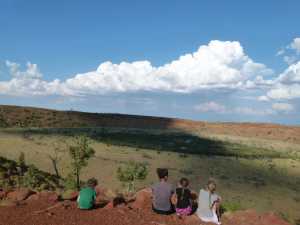 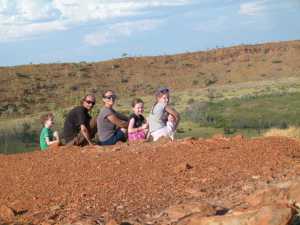 The Roaming Rowes took in the crater for hours.

To get to Wolfe Creek the Roaming Rowes were going to have to shatter their boundaries, take a risk and throw caution to the wind.  I mean what red blooded Aussie doesn’t want to go to Wolfe Creek, with all the hype of the horror movie of the same name!!  Horror movies based loosely on real events was one reason, but the main reason for us was it being the site of the second largest meteorite crater in the World…in the world!  This bad boy, when it hit would have changed the world at the time.  Really!? well yes, it was travelling at 15 kilometers per second and weighing tens of thousands of tonnes; it crashed into the earth with enough force to  change this Aussie landscape forever. 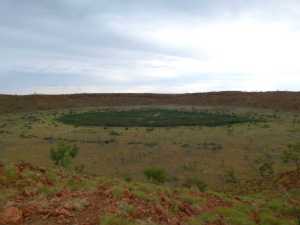 The Jaru and Walmajarri aboriginal people have known of this craters existence for thousands of years and call it Gandimalal.  It wasn’t until 1947 that geologists whilst performing an aerial survey recognised this as a crater.  Regardless of how you believe the crater was formed, it is a sacred place and the mere fact it was created 300,000 years ago makes it very special. 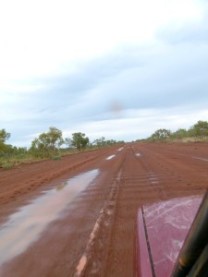 Some of the smaller corrugates.

Since we left home from SE QLD we have not paid for a caravan park once, that was about to change.  Often if we explore without our van (we call ‘Big Van’) we like to stash it, but with the rain we decided to inquire about van storage in Halls Creek.  The Halls Creek caravan park offered us a storage fee for $6.50 that’s  a bargain in anyone’s language.  We even got to fill up our water supplies (extreme water restrictions out there)  for nicks there also; $6.50 well spent. 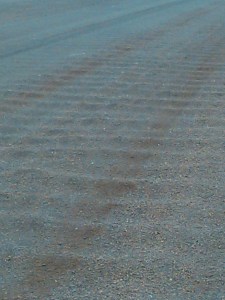 Some of the smaller Corrugates. 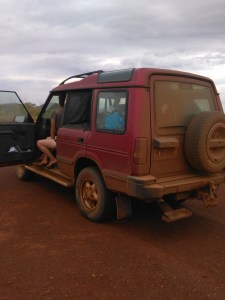 The ‘General lil Red Rover’ did us proud. 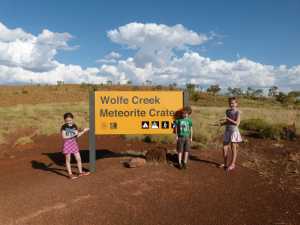 We Made it to Wolfe Creek!

130 km of degraded dirt road is now all that lay between us and Wolfe Creek.  When we say degraded we mean it was a shocker, severe corrugates, rocky patches and winding in parts.  All good we have an 18 year car, it’s got this right?  Well a lesser car may have buckled at the task at hand but not ‘General lil Red Rover’.  Let’s not forget that this beast of a rig reached General status back at Gunlom Falls in Kakadu.  Still we would be lying if we said we weren’t a lil nervous and took lots of water just in case we had to walk out and end up on an episode of I Shouldn’t Be Alive.  Nothing to worry about though it’s the General, and she didn’t let us down. Here is a pro tip for driving on a bad corrugated road, but first let me share the most important rule.  The most important rule, at all times when driving, is to drive to the conditions subject to what you are comfortable with.  This is true regardless of what road; another words if you are comfortable with doing 80 than do 80, if you stretch beyond your comfort level you are prone to panic should something unforeseen happen. With that said the pro-tip is this, go faster on corrugates and it will lessen the vibration.  Let me explain it to you how my lovely wife explained it to me.  Bust out your bicycle and go really slowly over a cattle grid, it’s full on do you even still have a crotch?  Now chuck a u-turn and go over the same grid but this time pedal as fast as you can, Brrrrrrr and it’s done.  This same logic applies when driving on corrugates.  In saying that on the way back we had water on the road to deal with, so the conditions dictated that we slowed down regardless. 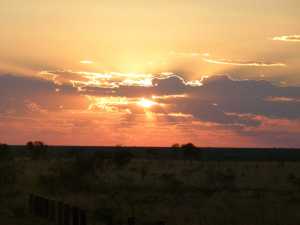 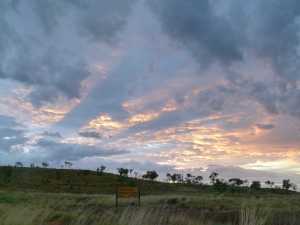 Not to be outdone by the spectacular sunrise.

The Roaming Rowes sat on the wall of the Meteorite crater for a couple of hours soaking in the atmosphere and enjoying sunset.  We even had the pleasure of enjoying sunrise there as well, although cloudy it was also spectacular.  The centre of the crater is distinct and quite dense and bright white, the concentration of salt is high here and you really notice that in the vegetation.  The Black Cockys and lizards were amazing there and even a few BIG roos made an appearance for us.

After the main event that the crater had to offer we journeyed back to our car, it was than we realised our battery was flat and a guy was scoping us up with a 308…. no No NO! Wait got lost in fiction there for a bit, back to reality. 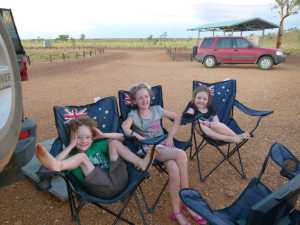 Kids watching Inside Out, at Wolfe Creek. 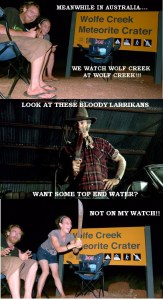 So upon our return we cracked on a movie for the kids ‘Inside Out’ which is a Rowe family favourite; a cartoon explaining a little of the intricacies of feeling and emotion is bound to be a winner.  After a simple tea the kids were knackered and drifted off to sleep in the car.  BEAUTY! Let’s do this, so off we went to our 2 person tent ran a lead and our t.v to it and it was showtime!  The long awaited Wolf Creek was now showing at Wolfe Creek.  The wind, thunder and lightning all added to the ambiance it was simply amazing and something we will never forget doing.  Pretty sure when we are 64 we will still be reminiscing “Remember the time we watched Wolf Creek at Wolfe Creek”. 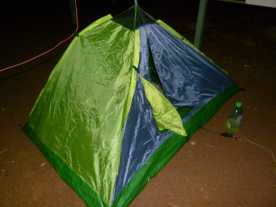 Wolf Creek at Wolfe Creek, don’t worry we zipped it up.

One thought on “Wolfe Creek”