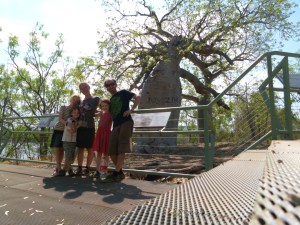 Since arriving in W.A we have been in awe of the amazing Boab Trees; they are a common sight in the Kimberley region.  They are unique in the sense of them being the only member of this type of tree species anywhere in Australia. It’s fancy scientific name Adansonia gregori was named after the Australian pioneer explorer Augustus Charles Gregory.  One of the last things we saw in the Northern Territory on our way to Western Australia was in fact the Gregory Tree, a short 3km detour off the highway on dirt, well worth it.  About 80km East of Derby we stopped at a Free Camp rest area and the Boab there was amazing!  Estimated to be at least 1500 years old this tree was enormous, our kids set up camp inside and spent hours playing; a natural tree house that blew our kids minds. 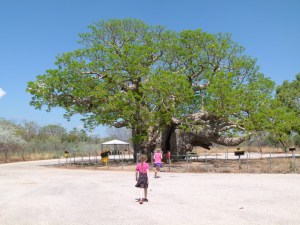 The Nyikina people of Derby call the Boab Larrkardiy; a number of Larrkardiy in the Kimberley have significant cultural and religious value to the Aboriginal people.  Elders have been known to invoke potent and severe powers from certain trees as a means to punish breakers of traditional law.  The aboriginal people have known of this special tree’s versatility and usefulness for thousands of years.  The tree has been used for shelter,  a food and water source, medicine, string and many other uses.  One thing for sure, the mystical nature of this type of tree is truly amazing and the ancient qualities that one can witness and indeed feel is obvious. 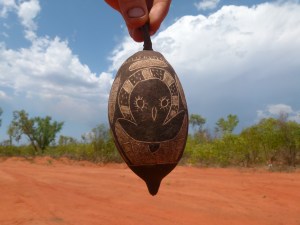 When in Derby we had such a wonderful experience, just outside the information centre there is a park.  We refilled some water supplies here and in the process struck up a conversation with a lady who was chilling on the grass with her friend.  It was renowned Aboriginal artist Roslyn Karadada, she has the warmest friendliest face you will ever see.  So we sat on the lush green grass for a good half an hour with her enjoying the atmosphere and company.  All the while she was etching an image in a boab nut with a simple kitchen knife.  We spoke of her connections with the land and family in Derby and the Kimberley region.  We asked her about the Boab fruit as we had heard that it was edible, in that moment she reached around grabbed a boab nut off the grass and cracked it open. 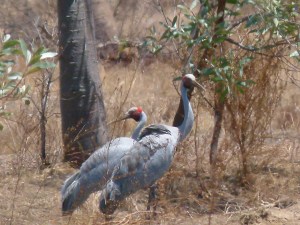 We shared around the white pith found inside, apparently good for in Roslyn’s words, “runny tummy”.  It was such a great moment for us and one we will never forget.  As if that wasn’t enough, at the end of the time we spent with her she gifted us with one of the boab nuts she had been etching.  The Roaming Rowes will carry this memory with them for the rest of their lives, the image on the boab nut (Windjana creation being) we immediately recognised from a news story we had read but weeks earlier, Kimberley Rock Art Amongst the Oldest in the World. 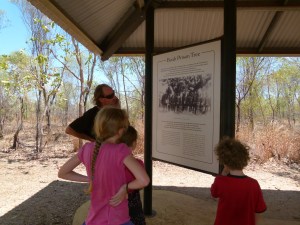 The identity of the ‘prisoners’ was confronting.

We usually have an idea of things we want to see along our journey and the prisoner boab tree was one we had been talking about seeing for months.  The day had come for the long awaited prisoner boab tree visit just outside of Derby.  I’m not sure what we were expecting to see, just that prisoners had been held there; it was actually quite confronting when we realised the identity of the prisoners.   Turns out the tree was most commonly used to hold aboriginal slaves often while waiting for the boats to arrive fueling the pearl trade of the coast at the time.  I must say this trip has taught us a lot, particularly the sensitive nature of cultural awareness regarding the first Australians.  It’s pretty well documented the poor treatment of the first Australians upon European settlement and this was just another example. 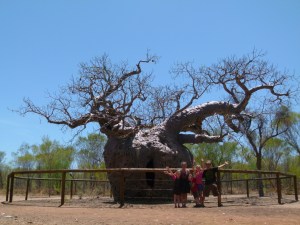 It’s easy to feel like ‘It’s got nothing to do with me’ or ‘Well I didn’t do it, nor did my grandad’s – grandad so why should I feel bad’ but at the end of the day, experiences like this has made us, as a family, only too aware of the importance of reconciliation.  For us it’s experiences like this that shed light on the complex nature of rebuilding trust and allowing trust to be rebuilt; it’s about respect for the rich aboriginal culture in our country.  The nation as we know it is young, Europeans have been here less than 250 years as opposed to the 60,000 years of first Australian occupation.  The problems that exists in certain places we have seen have formed over generations and it’s likely it will take generations to repair.  Clearly we could rabbit on about this for a long time it is something we are very passionate about.  In essence though reconciliation starts with individuals… you right now.  Reconciliation needs a generational approach which focuses on two-way relationships.  We have seen in Kakadu how this is true, respect goes both ways there and it started decades ago.  If you are interested in this topic you should visit a fantastic resource site Share Our Pride used by tertiary institutes, governments and community agencies.