Still riding high from our time at Uluru and the surrounding area nothing could bring us down, well that is until the unexpected paid us a visit. Bam! screech, eeeek! One of the caravan tyres Blew and I might add in a big way.  Remaining calm, as you must; I steered the ole girls gently clear of the road and to a safe place. I think we may need a tyre and rim.

So I cracked out the spare and put her on, turns out it was for a passenger vehicle and not really suitable for the van, this was quite obvious by the pressure it showed under load at max psi.  Needless to say it was a rather stressed  100+ km’s back to Alice Springs with no spare and a tyre that was not really suited for it’s purpose. Once in the Alice I intended to replace the passenger tyre for a light truck tyre and grab an additional rim and tyre for a spare.  Alice has a couple of wreckers; the first I rang was actually quite rude, However the second I rang was very friendly and helpful.  Despite being friendly and helpful the crew at Territory Wrecking were unable to help me with a rim.  As it turns out Territory Wrecking are part of the Sutton Auto Group in Alice Springs, So we decided to get the tyres we needed from the Sutton Tyre Centre there at Centrepoint cars.

So we now had two new tyres and was feeling a little better but one big problem still remained.  No spare tyre because we could not buy a rim, infact we could not even identify the rim, was certainly not the standard Ford or Holden rim often found on our aged van.  All signs seemed to point to a Japanese type of car of the mid 80’s era, something like a Mazda.

While we were in Alice we found one of our favourite camp spots thus far, between Emily and Jesse’s Gap. 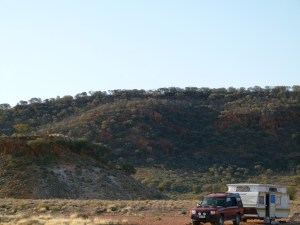 Not only was it breath taking red centre country but this place was calling us, and for very good reason too.  When looking for a place to stop it’s standard for my lovely Wifey and I to walk the track leading in. Primarily we do this to establish if our setup can make it, not exactly an off road setup.  Upon walking down this track though there was yet another Tyre graveyard. Not just any old tyre graveyard this one though, this one had many 4 stud rims; which meant we were in with a chance to find a much needed rim which would again give us a spare.  A chance is better then no chance but we needed it to be 4 stud and 100 centre bore, all of the rims there had a centre bore of about 110, well all but one.  Seriously, What are the odds!! The universe had looked after us once again and sure enough our seemingly rare rim was just sitting there ready for a new life with the Rowes. So to recap; could not buy this particular rim anywhere and believe me we tried, then as if by chance we choose a spot with exactly one of this type of rim, and all for nicks, Booyah!

3 thoughts on “That’s Blown It”