There we were, cruising along just outside of Charters Towers at about 9.00 pm, and I spotted a dead roo in the middle of the road up ahead. No biggy we will just go around it, ALAS! road train alert (hmmmm road train or roo); needless to say I chose to put the roo between my wheels and under the beast. Thud, (hmmm ok all good, right?) Well not quite, the lil Red Rover had reduced in power and I heard the sound of the diff giving a distinct whine.  We limped into Charters Towers and  found a place to park for the night.  Having a cuppa that night we knew it wasn’t good but played it down for the family, no point freaking everyone out willy nilly (I’m a panic merchant from way back).

The next morning, in the light of day it was time to investigate the problem and formulate a plan. Ah Ha! there it was as I looked toward the diff, the tailshaft coupling had taken a hit and was clearly in need of replacement. 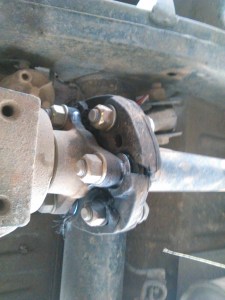 So here we were stuck in the middle of Charters Towers, in a definite no camping zone and in need of a part. It wasn’t looking good but shake it off and time to regroup.  Hit up Ebay and got the part from one of our favourite sellers at  All Four x 4 Spares for $127 including postage.  So with the part ordered we had made some progress, however it’s Thursday now and we were concerned the part, coming from Newcastle, would take some time to get to us in Charters Towers. To compound our problems, a visit from the local council to inform us that our location was a no camp zone and usually the council have a zero tolerance of camping without a permit in city limits.  I pulled out the silver tongue, turned on the twinkle eyes and pleaded our case.  The Charters Towers city council deserve a big rap about now, a big THANK YOU goes out to Charters Towers council for making an exception and understanding our situation.

So here we were, parked across the road from the good people at L&F Tourism.  They were kind enough to allow us to have the part sent to their address.  Friday came around and we explored Charters Towers on foot returning to our van that afternoon.  Right on closing time Friday one of the good folk from L&F waved us over and said our package had arrived, we could not believe it!  A little more than 24 hours from time of placing the order had passed and the part had gone from Newcastle, N.S.W to Charters Towers in Q.L.D; Wowsers!

Everything was coming up roses for us.  With the help of my trustee assistant, in my beautiful wife, we installed the part early Saturday morning and were back in business and indeed on the road again. 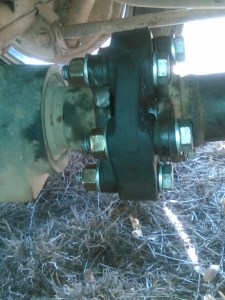